Boiler Grand Hall is located on the third floor of the Grand Manse building at 129 North 10th Street in downtown Lincoln, NE. Enter through the northeast doors and go through the second set of double doors. Take the elevator to the third floor and you’ve arrived!

Jazz has a new home in Lincoln. 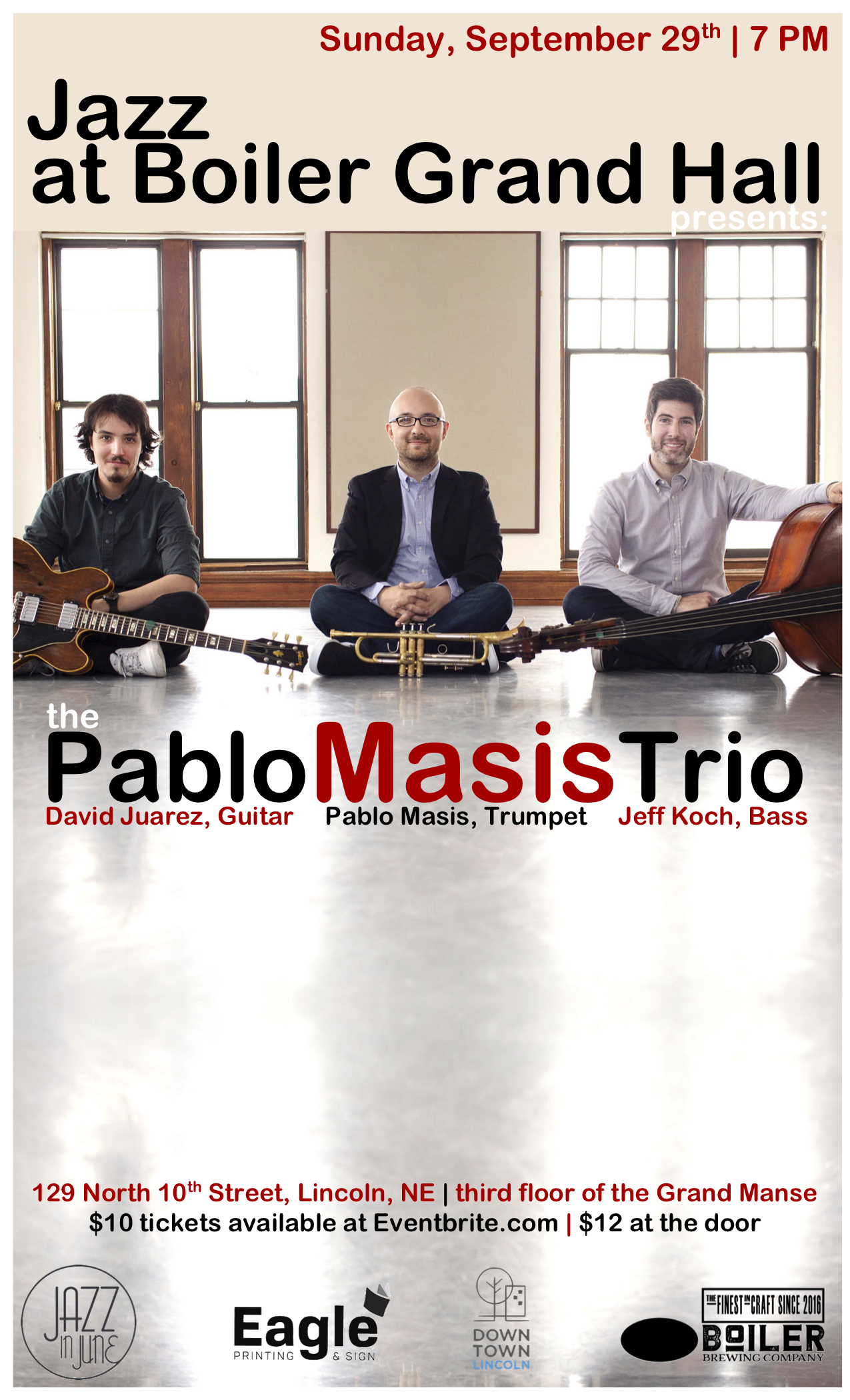 Originally from Cleveland, Ohio, Pablo grew up in Northern Arizona and Billings Montana. He studied classical trumpet at Lawrence University and the University of Wisconsin-Milwaukee, and received a Master’s Degree in Jazz Studies from the University of New Orleans, where he studied with Terence Blanchard. Since moving to New York in 2009, Pablo has released three recordings of his music, including “Intrinsic” in 2012, with Chad Lefkowitz-Brown on saxophone, Alex Brown on piano, Linda May-Han Oh on bass, and Jared Schonig on drums. His most recent recording, “Rubicon”, was released in 2014 with Aidan Carroll on bass and Jared Schonig on drums. Pablo has performed at venues across the United States and Europe including The Kennedy Center, The Blue Note, and The Waldorf Astoria, and has presented concerts at the Brooklyn Conservatory of Music. In 2015, Pablo was a guest teaching artist with the Afghanistan National Institute of Music in Kabul, Afghanistan.

Barcelona native, David Juarez (John Abercrombie, Jesse van Ruller, Martijn van Iterson) is a New York based guitarist that has played with world class musicians the likes of Seamus Blake, John Escreet and Peter Bernstein. David graduated from the Conservatory of Amsterdam and moved to New York shortly after the release of his debut album “Round Red Light” (Posi-tone) where he has been regularly performing for the last decade.

“Scorching intensity and substance from start to finish” (Jazz Times)

Bassist Jeff Koch was born and raised in New York City. He began playing electric and upright bass when he was 13. Since then, Jeff has performed at prestigious venues in NYC and around the world including The Blue Note, The Kennedy Center, and The Bimhuis (Amsterdam). One of his projects took first prize at the International B-Jazz Competition held in Belgium in 2015. He has shared the stage with notable musicians including Dave Liebman, John Faddis, Shilpa Rao, and Trixie Mattel. Jeff has also been an active teaching artist, working with programs such as: Lincoln Center’s Jazz for Young People, Bank Street School for Children, the Jazz Standard Youth Orchestra, and establishing the True School of Music in Mumbai. He has received a Master’s degree in Jazz Performance from the Manhattan School of Music, and a Master’s degree in Music & Music Education from Columbia University’s Teachers College.

Boiler Grand Hall is located on the third floor of the Grand Manse building at 129 North 10th Street in downtown Lincoln, NE. Enter through the northeast doors and go through the second set of double doors. Take the elevator to the third floor and you’ve arrived! Brought to you by Boiler Brewing Company, Jazz in June, Downtown Lincoln, and The Eagle Group. Boiler Brewing Company beers will be on tap. Doors open at 6:30 PM. Show starts at 7 PM.

Jazz has a new home in Lincoln.